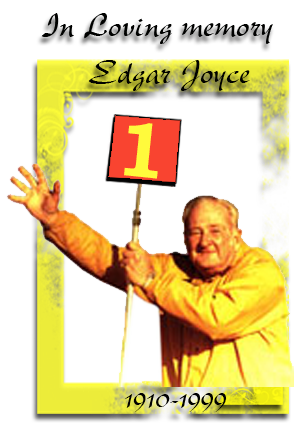 To laugh often and much; To win the respect of intelligent people and the affection of children; To earn the appreciation of honest critics and endure the betrayal of false friends; To appreciate beauty, to find the best in others; To leave the world a bit better, whether by a healthy child, a garden patch or a redeemed social condition; To know even one life has breathed easier because you have lived. This is to have succeeded. –Ralph Waldo Emerson

“He was Santa Clause”

Edgar was born in Bridgeton, New Jersey, on July 30, 1910. His name was synonymous with area sports and with his contributions to support them. In the words of Cumberland Regional High School Superintendent Robert Bumpus, “There is a place in Kevin Costner’s field of dreams for Mr. Joyce.” It is a statement that will find little refute from anyone who knows Edgar.

Not only did Edgar sponsor and support teams, but he attended all the games that he possibly could. His son George, related that they sometimes attended four games in one day and six over one weekend. Edgar attended all home games of the Cumberland Regional High School boys’ and girls’ basketball teams. For 38 consecutive years Edgar did not miss 1 (home OR away) Bridgeton High School football game. This streak went on from 1938 until 1976.

Edgar was always a giving man, he supplied Cadillac convertibles for the annual Miss America Parade held in Atlantic City, New Jersey. He owned all the vehicles supplied and this lasted from 1952 until 1995.

Edgar has been honored by the New Jersey Senate (1978), the New Jersey Assembly (1978 and 1989), the Cumberland County Freeholders (1989), the Township of Upper Deerfield (1989, 1999 and 2000), the City of Bridgeton (1983 and 1989) for his lifelong support of youth sports and his commitment to the betterment of many communities in and around Cumberland County. Here is a man that has truly dedicated his life to South Jersey youth and communities. Edgar has touched the lives of countless thousands of people from his sports and non sports involvement. He has no equal. Edgar is a man who is loved by all.